Since I just did lot of experimenting with my two Charvels and the Jackson, thought I'll share what I discovered.

As most already know, OFR/Lockmeister sounds sharper with more highs and stronger tone than the Schaller Floyd II. The Soloist came with a 2004 Schaller and had a surprisingly strong tone and lots of highs. The white Charvel came with a Charvel branded Schaller from 1991 and sounded worse than a tin can.

Still I wanted to try an OFR in the Jackson, so I took it from one of the Charvels and installed it in the Soloist. Unsurprisingly, it added more volume and even more highs. So much that the tone became too stingy and scratchy. Played it for a while and clearly the tone was more pleasant with the original trem.

Meanwhile, since I moved the Schaller to the Charvel, I thought I'll use the Charvel baseplate, so I swapped the Schaller plate with this one. After putting it all together, the tone was totally weak and tinny, harmonics dying out after a second at best, just horrible.

So I swapped the OFR back and installed the Charvel plate Schaller in the Jackson. But now the tone was just as shitty as in the Charvel. The only difference being the baseplate, I swapped that back. Suddenly, the nice full tone came back. Almost like the OFR but just a little mellower, which definitely suits the guitar better.

While switching the Charvel/Schaller plates, I found out that the Charvel-branded one is made of absolute pot metal, clearly audible difference when you knock on them with a wrench. I also have another one with Gibson logo and that one (from 1989) is just as crappy as the Charvel one. The mid-2000 Schaller branded one definitely sounds much better, the material is not the same.

Either they used cheaper material for the OEM versions, or they changed the mixture in the 2000's. The newer one has WAY better tone.

Also I used the occasion to put a Gotoh into the Charvel and that one is quite similar to OFR but has even a bit more highs. I guess the real brass block adds a tiny bit more bite.

So just in case you have a guitar with OEM-branded Schaller and it sounds horrible, you might want to try a newer Schaller baseplate before going with OFR. The latter might not be an option in some guitars - in the same guitar, Schaller sits about 2mm further away from the neck compared to the OFR. The cutouts for the knife edges are deeper on the OFR, so some cavities might get too tight at the front edge. In my Gibson U2, the front of the OFR baseplate literally touches the cavity wall, while Schaller sits fine in the cavity. Now I must order a more recent Schaller plate for that one.
Top

An easy fast way to check the saddles material is with a magnet. The pot metal won't be magnetic. Same deal with some blocks. Some brass blocks are plated. A steel block will be magnetic the brass will not be.

All the same saddles on Schallers and OFR in this case, just the baseplates (and locking screws shape) are different.

I didn't know there were two grades of the Schaller Floyd II baseplate, I'd really like to know if it was OEM only version or a change of material at some point. I need something for my U2 and the crappy Gibson branded Schaller sounds horrible. Thought about ordering a newer Schaller plate.
Top

I actually found a visible difference - the knife inserts in the Schaller have a wider taper around the knife edges, seems like they might be a bit thicker as well. Here are some pics Schaller vs. Gibson branded (Charvel one looks the same as Gibson) - the tone difference is like day and night, although they look almost identical.

Schaller, less flat area and wide taper around the edge: 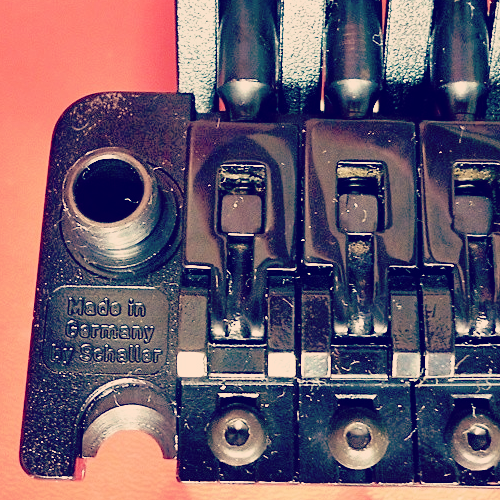 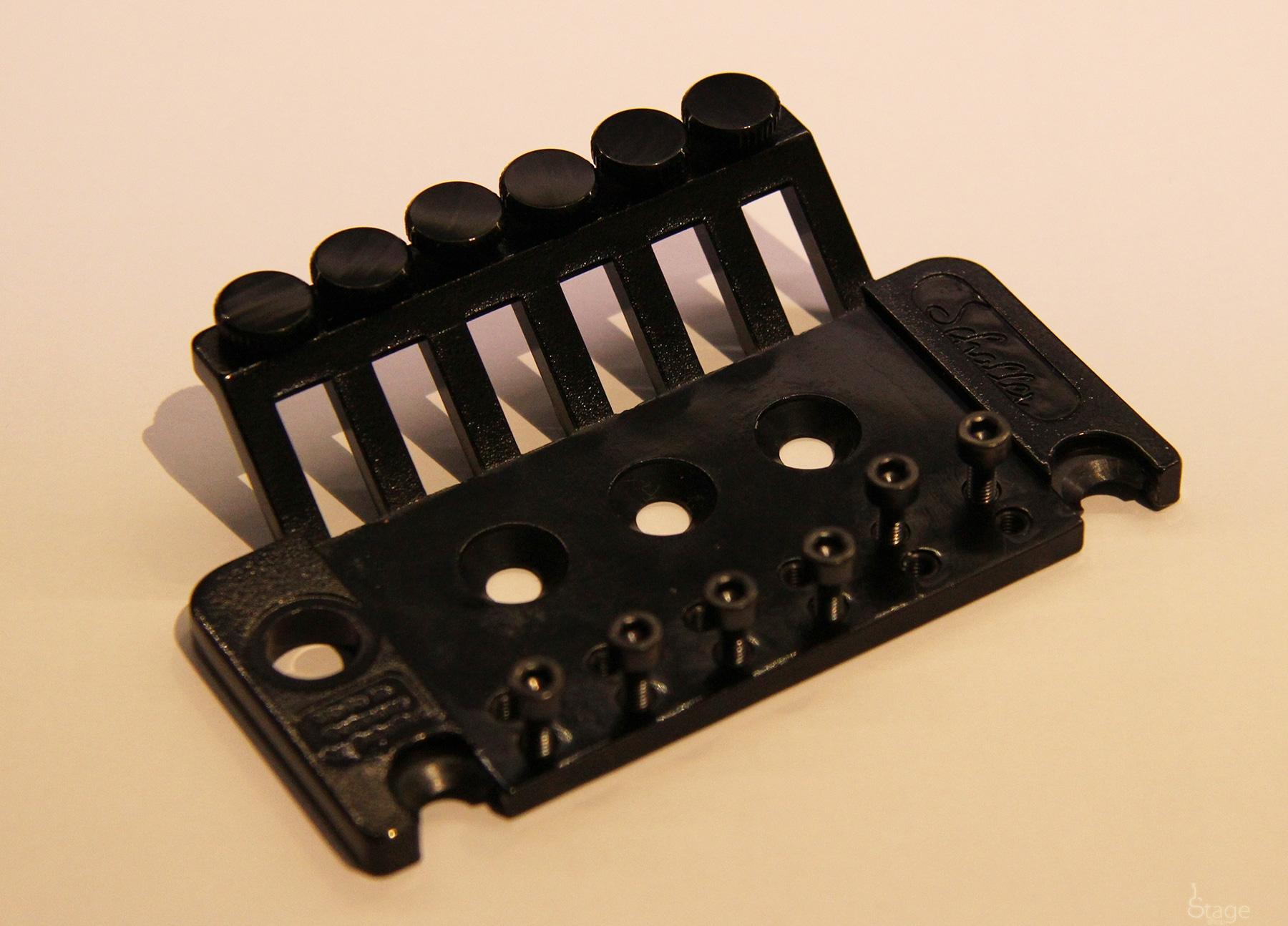 
Cool thing is, you can actually order replacement inserts (not for the OEM branded ones, only for the "original") from Schaller directly:

Never had a problem with a honest-to-God Original Floyd Rose. I've replaced several copies over the years and never been disappointed. I would think that any issue brought by an OFR would most likely related to the block, which everybody seems to be unable to resist fucking with. Other than length, I've always used OEM blocks and it's always been drop-in and go as far as success and worthwhile tone is concerned. YMMV.

RE: The FR 1000 is a decent stand-in, but still not the same as the OG real deal. That said, I'm not a complete snob, just a fan of period correct hardware. I can't stand the cheap-looking wrench holders that come on guitars these days, and they must be replaced with the Floyd wrench holder. If I like a guitar that's a reissue, like this original that I'm futzing with right now, it gets w. German Schaller tuners. Why? Because it will bug me, but I also believe that Schaller tuners are the one thing on the guitar that can get a pass as quality hasn't eroded with time. The stockers however, are far from Schaller and merely resemble them, down to the angled screw boss.

Some people can tell the difference between Sapele, and alder; to me they're virtually the same in terms of tone, weight and density, so that's a wash for me. I had great results with an early 00's DK2M and expect a similar outcome with this guitar. Will it be the same as a real 1985 D/E plate Baretta? Hell no, but will it be close enough for me to enjoy at less than half the price with upgrades in place? Heck yeah. Time will tell, I guess. I'm not into polishing turds, but if somebody else thinks I am doing just that, then fine. You enjoy your awesomeness, and I will do the same, only with money left over for a new HK45 so I can flex on the poors!

The big discovery for me was the two quality levels of Schaller Floyd II (OEM vs. "original", or maybe old vs. new). So after discovering that the "original" Schaller sounds way better than the OEM branded ones, this is really helpful and might just save my Gibson U-2 restoration, without having to increase the cavity and move the posts for the OFR. And trust me, this difference is easy to hear for anyone, not subtle at all but really severe. Almost like tin can vs. pitchfork.

While there is a difference in tone between Floyd 1000, Ping, OFR etc., those are not quite as severe as with the sandwich plate Schaller versions. But of course, in 99% of all cases I'll go with the OFR since it sounds better than any clone except Gotoh.

OFR (or all steel Wilkinson, or Gotoh) can have too harsh highs in some guitars - this Soloist is one of them. Another issue is the geometry, some Schaller cavities can barely take an OFR and also the room for intonation may not suffice due to the OFR being some 2mm closer to the neck. In the rear, the locking screws are often too long for the cavity, but Schaller makes shorter OFR screws as well so that can solve the issue - I did that in the white Charvel. Which also has the low E saddle so far in the rear that it hits the slanted rear part and thus reduces the range of the fine tuner. It is within tolerable range, but would actually need another mm to get the intonation 100% perfect for the low E.

Fine details that do matter a lot sometimes... not always as easy as just slapping an OFR in there.
Top

I’ve always been a “just play it “ kind of guy. 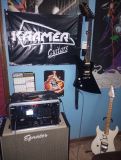 the new schaller 6s are the best floyd ive used

I agree, I have a gold Lockmeister and it is every bit as good quality as my 1980's OFR's ever were. I'll definitely use them on projects if available.

the new schaller 6s are the best floyd ive used

Lockmeister is the OFR, just another label on it.
Top
Post Reply
12 posts